Like everyone else, I was expecting some really good deals to happen on Amazon Prime Day. I was sitting and watching, but a little late on the trigger for the $75 32-inch TV and $115 40-inch TV.

Even though I ordered separately, Amazon consolidated my orders and I got free same-day shipping. I ordered at 10am and received my items around 6:30pm. That’s one perk of subscribing to Amazon Prime while living in a metropolitan area.

Here’s me in the chef hat. Everyone loved that pic. 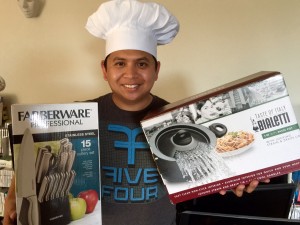 I figured that I should break in my new hardware by cooking up a meal. I decided that I should cook spaghetti. I chopped up onions and tomatoes with my new knives and used the pot to boil up my pasta. I made a video, too.