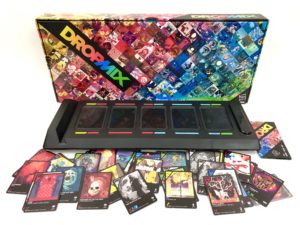 Dropmix is both a collectible card game as well as a new type of music game from Hasbro and Harmonix. Unlike Harmonix’s previous music game, Rockband, where you keep the rhythm with plastic instruments, the player instead plays with parts of songs in the form of NFC (near-field communication) cards. There are cards for rhythm, beats, instruments, and vocals. I got to experience this game for the first time at PAX West this summer and couldn’t wait until its release.

The base set comes with the game board and 60 cards. You do need to download the free Dropmix app, available on both iOS and most Android devices. These apps connect via Bluetooth to your device.

The cards have NFC tech built in. They aren’t totally flat due to the embedded antennas as one may assume. At PAX West, I was shown that the board would read up to 5 stacked cards. In my own testing, I’ve stacked up to 10 or 11 before the game told me it was at the limit. This as with cards naked. I have since then put protective sleeves on my cards so that they will last longer. This is a lot better than the 5 I initially was told. But then again your mileage may vary. I am going to be adding card protectors to my cards. That will definitely increase the thickness and the stack limit.

There are several different types of cards. Colors correspond to the type of card they are and where they can be placed on the board.
-Vocal (Yellow)
-Instrument (Red)
-Drums (Blue)
-Rhythm (Green)
-FX (White)

The Dropmix Music Game Board

The game board is made of good quality plastic. It’s a lot lighter than I thought it would be. The game board runs on 3 AAA batteries. The board itself has 5 spaces to lay down cards. Starting from the device stand: Yellow/Red, Red, Red/Blue, Blue, and Blue/Green. This assures you get a good mix of cards to create proper mixes.

You can add cards to your digital collection within the app. This lets the app know which tracks to download for future use. It also lets you know what you’re missing and can point you to Hasbro’s website to purchase ones you don’t have. After downloading the card tracks, you can set your device to airplane mode if you don’t want the distractions of calls, notifications, or other sounds from the device.

I try my hand at the interactive demo with the base set of cards.

For 2 to 4 players. The goal is to reach 21 points. You have to pay attention to the type, level, and where you can set your cards down. There is a tutorial and rules video straight from Hasbro here.

Everyone plays together as one team. The goal is to get the high score by meeting the (on screen) crowd’s requests as fast as you can. Hasbro’s official Party Tutorial and rules video can be found here.

Freestyle let you create any mix you want, any way you want. The sky’s the limit.

There are already 2 series of expansion packs and 4 special playlists sets available. I’ve got them all on order and will be reviewing them soon. 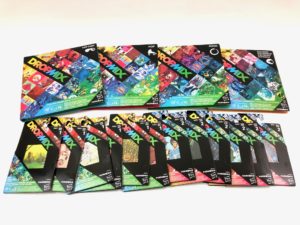 More than just a game

This is a great toy and musical player. It lets one physically play with music in a way that has never really been done before. Everyone that I show this to gets wowed by its ease of use and intuitiveness in Freestyle mode. They are surprised that there are game modes as well. Hopefully Hasbro/Harmonix can come up with more ways to play. I also have no doubt that there will be even more expansions than the ones that are already. I’m sure when companies see the appeal of Dropmix, they’ll want to get in on the action as well.

Check out Amazon for the Dropmix system and card expansions.