Karma is a unique service in which you pay for a $99 wifi hotpot for wifi access to the internet. You prepay for data that never expires. You can also earn data by sharing your connection with others. Each new person that logs onto your device earns both of you data. 100MB for them and 100MB for you. I have earned tons and tons of data just by keeping my device on at Starbucks, the airport, or events such as San Diego Comic Con, CES, and SXSW.

I was one of the first to order when Karma announced their next generation Karma Go Wifi hotspot last summer. They promised to get the devices out by Christmas of last year, but then there were delays. Delays due to manufacturing, delays due to testing, and delays due to certification. After months of waiting, I finally have my device in my hands. 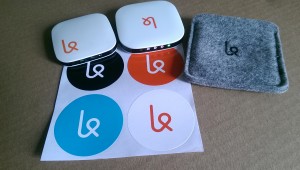 These delays were not really a big deal to me, but I don’t mind if I will be getting a quality product. I loved the original Karma device, now known as the Karma Classic. It operates on Sprints WiMax network and was kind of spotty with service. It worked really well in metropolitan areas, but not so well outside of that. Karma Go promised to alleviate that by running on 4G LTE and falling back on CDMA (when LTE isn’t available).

I got a shipment notification late on Friday, but the FedEx number didn’t work when I tried to track it. I just figured it was just the electronic info transmitted to the shipper. To my surprise, FedEx knocked on my door at 11am on Saturday and my Karma Go was in the package.

What’s in the package?

Unlike the Karma Classic, which shipped in a box, the Karma Go is packaged in a zip top foil package shipped in a padded envelope. Here’s a video of me opening it.

The specs show download speeds to be 6-8Mbps and upload speeds of 2-3Mbps. I tested this briefly in the video with Speedtest. I also had to drive my car 60 miles today to reset a computer after replacing a part. I had my Karma Go with me as I drove 30 miles down the San Francisco Peninsula and back. I didn’t experience any loss of signal. Let’s see what the next week brings.

I’ll be posting my full review up at www.WorldOfGeekStuff.com after I get to fully test the device.

If you’re interested in ordering your own Karma Go device and spreading some Karma, you can get $10 off by using this link as well as helping me get $10 in credit. https://yourkarma.com/invite/nypgzp