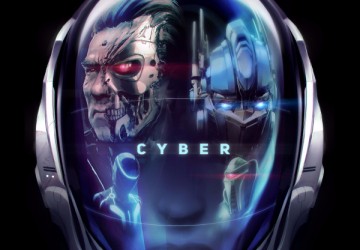 The theme for Loot Crate June 2015 is Cyber. The teaser image put put showed us The Terminator, Optimus Prime, Tron, and a Cylon from Battlestar Galactica. These are all franchises I am familiar with. I love coming home and finding a new Loot Crate on my doorstep. One of the first things I notice is that the box is shaped differently than most. Most are flatter while this one was taller and wider.

EXCLUSIVE Prime T-shirt by djkopet designs -The first thing that caught my eye when opening this box was Optimus Prime on a t-shirt. On closer inspection, I saw that Optimus Prime was recreating Tron’s iconic pose from the original movie’s poster. I can see myself wearing this shirt out. It is easily my most favorite Loot Crate t-shirt so far.

EXCLUSIVE Terminator Genesys Endo Skull Replica by Chronicle Collectibles -This half scale skull is very detailed and looks great. It has a great paint job and looks like it has been worn in. The red eyes also look like they have an electric glow. You not only have the skull, but the shipping box becomes part of the shoulder and neck to display this piece. Don’t turn your back on this thing or he might get you!

Future Replicant Corporate Logo Patch by A-B Emblem – This is a very nice high quality patch. I’ve never seen Blade Runner, but I will be sure to change that. I’m told that the company in the film makes superiorily engineered bio humans. That sounds pretty interesting.

Exclusive Glow-in-the-dark Circuit Gadget Pouch and button by Loot Crate Labs – This months Loot Crate button showed a circuit pattern. I found that pattern later on in the “pencil” pouch I found in the box. I later found out that this pouch glows in the dark. It’s made with a thick plastic and will probably hold my loot for a while. It also comes with a nice little metal clip to attach it to things. I have iut hanging off the side of my desk and have already filled it with pens and pencils.

Exclusive Borderlands Zer0 Game Mat by Loot Crate Labs – This Borderlands inspired mouse mat/pad is very bright and looks great. I’ll have to try it out a bit more to see if it compares well with my gamer specific pads.

Battlestar Galactica Cylon Target Poster Set by Quantum Mechanix – These posters are design to replicate range sheets or more commonly known as targets ate firing ranges. You get two Cylon posters in this set. I may actually take these out to a gun range and try my hand at a firefight with a Cylon.

Exclusive Nerd HQ Sticker Sheet by The Nerd Machine – Just a couple of Nerd HQ stickers and an ad telling us that Nerd HQ will be at San Diego Comic Con July 9-12, 2015.

Loot Crate June 2015 is another great box for what I paid. My favorite item in this box is the Optimus Prime shirt followed by the brain chip keychain. Loot Crate wins me over pretty much every month for what I have paid. I haven’t been disappointed yet, but maybe those stickers….

You know you want in on this awesome Loot Crate swag every month. Why not subscribe?

Click Here to Save $3 on your first Loot Crate box