One of the perks of being a member of AMD‘s Red Team Plus is that I get to play with some sweet hardware. I was recently sent this MSI Radeon R9 380 Gaming 4G. Each of us members got a different card so that we can check out and compare the differences.

First off, these cards are not rebrands. They are made more efficiently with all new processes. If this was simply a rebrand of the previous generation, it would be the exact same with a different name on it. This GPU features an Antigua Pro GPU which is based on the previous Tonga Pro GPU featured on the R9 285. 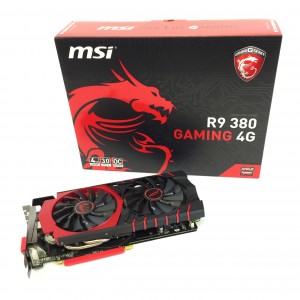 This GPU sports a host of features.

Specific to this MSI GPU are:

I’m using my tried and tested gaming rig for testing. I’ve used this system to test other cards before. I also tested a PowerColor R9 290X and Asus Strix R9 285 alongside the MSI R9 380. I even ran the 380 and 285 in a crossfire configuration. 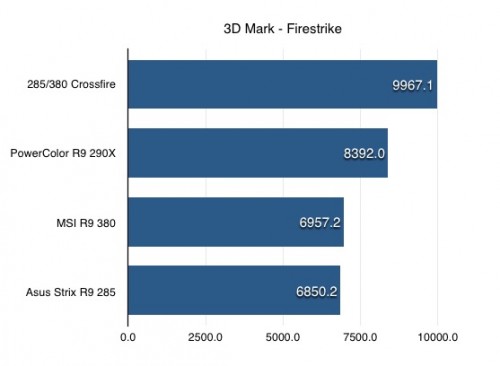 Looks like the MSI R9 380 barely edged out its predecessor. Crossfiring it with the 285 beats out the PowerColor R9 290X with a gain of almost 50%. 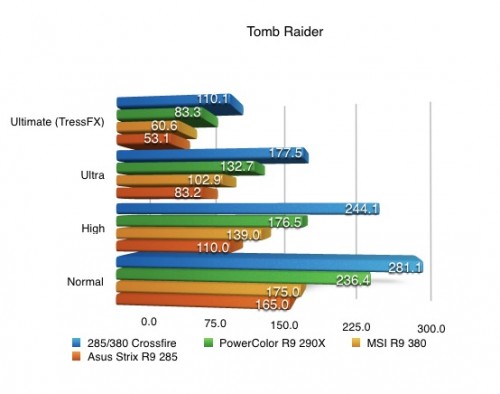 One of my favorite games is Tomb Raider. Luckily it has a great benchmarking tool built in. Tomb Raider had great performance at all settings. Even with TressFX on, the 380 yielded more than 60FPS on average. Crossfire with the 285 at Ultimate settings added an 80% gain in average FPS. The 380 consistently had better performance in Tomb Raider than the 285. 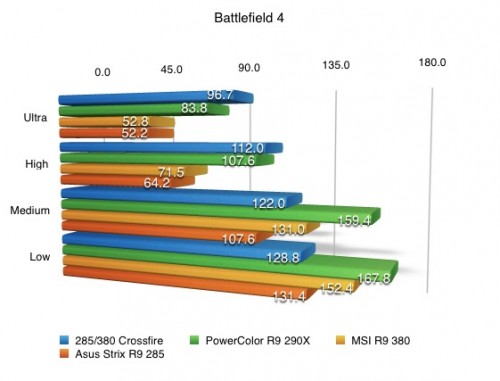 There were some surprising results with Battlefield 4. At Ultra settings, both cars pretty much performed the same. In high, the 380 was a tad bit better. Crossfiring 380/285 significantly improved performance at Ultra and High, but in Medium and Low, somewhat had degraded performance. This may be due to CPU bottlenecking. In the Medium setting, crossfire had a lower average FPS than the 380 by itself.  In the Low setting, crossfire averaged lower than the single 285.

This is a good card overall for a gamer on a budget. It is more than enough for my needs even though I am running more powerful cards in my household. One can run games at High at 60 or better FPS.

If one already has a 285, this isn’t probably the upgrade for them, but great if the goal is to crossfire. That being said, crossfire may have some hardware limitations as may have happened when I tested medium and low in Battlefield 4.

I’m not a professional PC guy, so these are just my own findings based on my own non-scientific testing. As a gamer, this is a piece of hardware that will do more than what I need. If you can’t afford to go Fury, 390X, or 390, then this is the best card for you.

Disclaimer: This hardware was provided to me by Advanced Micros Devices as a participant in their AMD RedTEam+ program.