Mr. Rick over at VisionTek was kind enough to send over a 128GB USB 3.0 Pocket SSD for me to review. I travel quite a bit and always have had the need for portable media. I’ve been surviving on multiple flash drives, but little did I know that this would change the way I use my portable data. 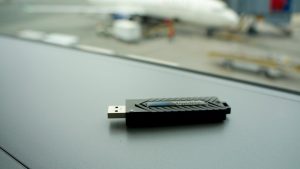 Check out my unboxing

The Pocket SSD itself looks very tough. It is made from aircraft grade-aluminum. It cam probably take a tough beating.

The front of the package says that is is up to 20x faster than average flash drives. Up to 450MB/s Read and 150MS/s Write.

The back of the package:

I used ATTO to test the Pocket SSD, desktop HDD and SSDs, as well as random USB 3.0 Flash Drives I’ve been using. I’m using estimate based on the graphs it produced for me. I tested several times to make sure the results were consistent. 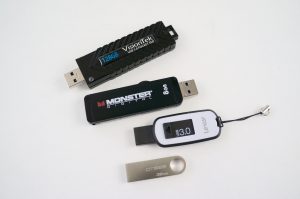 I’ll go from slowest to fastest with my results.

Why a pocket SSD vs a Flash Drive?

While roughly the same, they are different. They use differing technology. Flashdrives use a cheaper type of flash memory that has a limited number of writes before it starts to fail. An SSD also uses flash memory, but a more advanced version. An SSD also has a memory controller that optimizes the way data is read/read/written for better performance. The controller also helps extend the life of the flash memory in the SSD to be more reliable than a normal flash drive.

In researching the difference between flash drives and pocket SSDs, I learned quite a bit. I don’t think I will trust storing important data onto normal flash drives anymore. I will just use those for transport. I work with a lot of video and pictures and am in between San Francisco and Seattle as well as other places around the world quite a bit. I will definitely keep my data on my VisionTek Pocket SSD. Not only do I get more space than what I have been using, I also get better performance. Although I didn’t achieve speeds of 450/150 as shown, but I suspect that it has to do with my system setup. I’m on AMD and my Intel-based friends will probably get better performance.

128GB of data is a decent amount of space for the pictures and video I work on. This drive allows me to work directly off of it as it is fast enough to keep up with my computers. It does run a little warm when using it a bit, but that’s understandable with the reads and writes it is doing. If you’re looking for something better to work with than a flash drive, but cannot or do not want to upgrade yet to an SSD, this is the product for you.