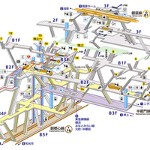 Now if only someone would create an augmented reality game based on these, I would totally play. I've been to Japan 60-70 times and have yet to get familiar with the stations in Tokyo.